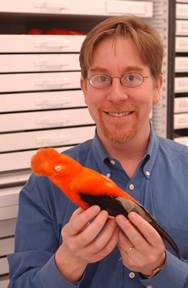 I have conducted field work throughout the Neotropics and in Madagascar, and have studied fossil theropods in China.

At Yale, I am the Curator of Ornithology and Head Curator of Vertebrate Zoology in the Yale Peabody Museum of Natural History. I have previously served as Chair of the Department of Ecology and Evolutionary Biology (2008-2011).

From 2012-2017, I was the Director of Franke Program in Science and the Humanities (http://www.yale.edu/whc/frankeprogram.html), which is an initiative at Yale that aims to foster communication, mutual understanding, collaborative research and teaching among diverse scientific and humanistic disciplines. The Franke Program sponsored lectures, events, workshops, and courses that span the major traditional division of the university. It is made possible by the generosity of Richard (‘53) and Barbara Franke.

2018                Pulitzer Prize Finalist in General Nonfiction, Nominated Work– The Evolution of Beauty: How Darwin’s Forgotten Theory of Mate Choice Shapes the Animal World- and Us.

In Fall 2014, I served as Yale’s William Clyde DeVane Professor. I taught an interdisciplinary course open to all Yale students, and the general public entitled “The Evolution of Beauty: From Warblers to Warhol.”